The Faith, Family, and Fortitude of Heath Ritenour

Since being appointed as CEO of Insurance Office of America (IOA) in 2007, Heath Ritenour has applied his values of authenticity and innovation toward continuing IOA’s growth within the industry.

Although running a large company requires great effort from a dedicated team, the success the company has today is a testament to Heath’s principles and work ethic — a legacy started by his parents, John and Valli Ritenour, who built the insurance brokerage from the ground up.

A History of Health

While Heath was experiencing fantastic success in his career, he also was enjoying fantastic health. Always an athlete and lover of sports, Heath worked out often and ate a balanced diet. In fact, fitness had been a steady aspect of his lifestyle since his days playing football in high school and college.

With a pristine medical history and active lifestyle, Heath was, by all appearances, as healthy as could be. So when he was diagnosed with cancer in 2015, the news came as a total shock.

One day while playing basketball with a group of younger athletes, Heath noticed a discomfort in his groin. This feeling amplified throughout the rest of the day, making Heath grow increasingly worried and uncomfortable. After visiting the doctor, he was informed of a tumor in his groin that soon became cancerous. Although the news was devastating, Heath understood that he had no choice but to follow chemotherapy treatments and trust that he would get the help he needed.

The diagnosis drastically changed Heath’s perspective on medicine. Up until that point, Heath hardly ever got sick, explaining, “When I’m sick, I don’t even take meds.” Suddenly, Heath was instructed to follow an intensive schedule of chemotherapy for about five hours every day. He was not only worried but incredibly fearful for what was to come.

However, Heath did not allow his battle with cancer to alter the course of his personal and professional lives. In fact, in the face of uncertainty, Heath summoned the courage to speak about his experience to offer transparency and set the record straight. Shortly after being told he had cancer, Heath filmed a video and sent it to the branches of IOA to show both agents and clients alike what he was truly going through. 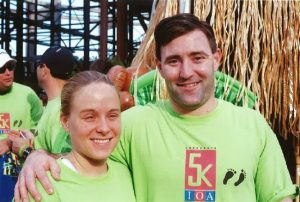 The video not only changed Heath’s perspective on himself but showed others the importance of honesty and vulnerability. By sharing his story, Heath helped inspire three other men at IOA to visit their doctors only to realize they also had tumors — one of which was cancerous. Fortunately, they were all caught in time. Any reluctance he originally had about opening up disappeared as he realized just how valuable his personal testimony could be.

Upon starting chemo, Heath wanted to follow the outpatient route, in which he would be treated in the hospital and then go home to rest and recover. This allowed him to strengthen both his personal and work relationships since he would continue to work while not in the hospital and spend time with his family at home. He has since acknowledged that his time at home was a blessing, and he became a better father, husband, and CEO from the experience.

Heath understood that not only did he need to grow in his relationships with his family and coworkers, but he would also need to grow in his faith with God. He came to the realization that, although he may have had his life planned out, he was not in control.

“It’s just me and God. I have no control over anything, and I was angry about that because I felt like I was not who I used to be. And then it dawned on me. I never had control to begin with.”

The sadness and anger he felt were washed away and replaced by gratitude for the experiences he’s had and the many blessings he still gets to enjoy.

“When you are threatened with not being able to do anything, it is no longer ‘what you’ve GOT to do’, it’s ‘what you GET to do.’”

Heath has since recounted his powerful journey in a video for Grace Church Orlando, his home of worship where he serves as an Elder.

Through his own perseverance, an emboldened faith in God, and the love of his family and support of his parents, Heath was able to embrace and overcome one of life’s most difficult obstacles and come out the other side a stronger and healthier man.

Now in remission, Heath continues to apply his new outlook on life toward building IOA’s future while treasuring the precious time he spends at home with his wife, Abby, and their two children.